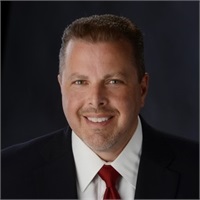 As the economy and markets changed, he searched out a firm that he felt was better prepared to handle the needs of its advisors and clients.  Looking for a firm with a broad diversified set of financial products and services, he chose Waddell & Reed.

Waddell & Reed has a rich history that dates back to 1937.

As a Managing Principal for Waddell & Reed in Maitland Florida, his office covered clients in almost all 50 states and Puerto Rico, with the highest concentration of clients residing in Central Florida, the Space Coast, and South Florida.  Mr. Eckert attained his Series 24 Securities Principal License in 2009.

Outside of helping his clients, Mr. Eckert enjoys helping local youth organizations and the community.  He has coached youth football for over 10 years, volunteered with First Tee in Connecticut, Habitat For Humanity in Indiana, Leukemia Society Team in Training, Wounded Warriors Project, as well as helped build a school in the Dominican Republic with CFC.

Above all else, Mr. Eckert enjoys being a Dad most of all.  When not at work, you will probably find him with his two sons, Alexander and Quentin.

Waddell & Reed is not affiliated with any other entities referenced.  11/19